In the late 1960s, a small group of citizens formed a grass-roots movement to look after their elderly neighbors living in San Francisco.

In the late 1960s in San Francisco, a movement to provide food and services for the City’s elderly residents slowly began taking shape. Community members, including those from the local women’s auxiliary, began preparing meals in their homes and in their neighborhood kitchens, delivering the fresh meals in their own vehicles to seniors in need throughout San Francisco. Around the time that MOWSF was forming, The Older American’s Act of 1965 was amended and signed into law in March of 1972 by President Nixon. This measure established a national nutrition program for seniors 60 years and older. By 1970, it became apparent that there were many older citizens in need of help in SF that we were not reaching. Our meal deliveries grew in the City from 100 individuals to a few hundred that year and at the same time, we were awarded our 501(c)3 nonprofit status.  In 1970, MOWSF was officially born!

Volunteers were the key to its success and longevity in the 70s and remain so today. In the 70s, they ran the entire operation, making and transporting about 1,000 meals that year, and shuttling seniors to their medical appointments, and even to get haircuts. 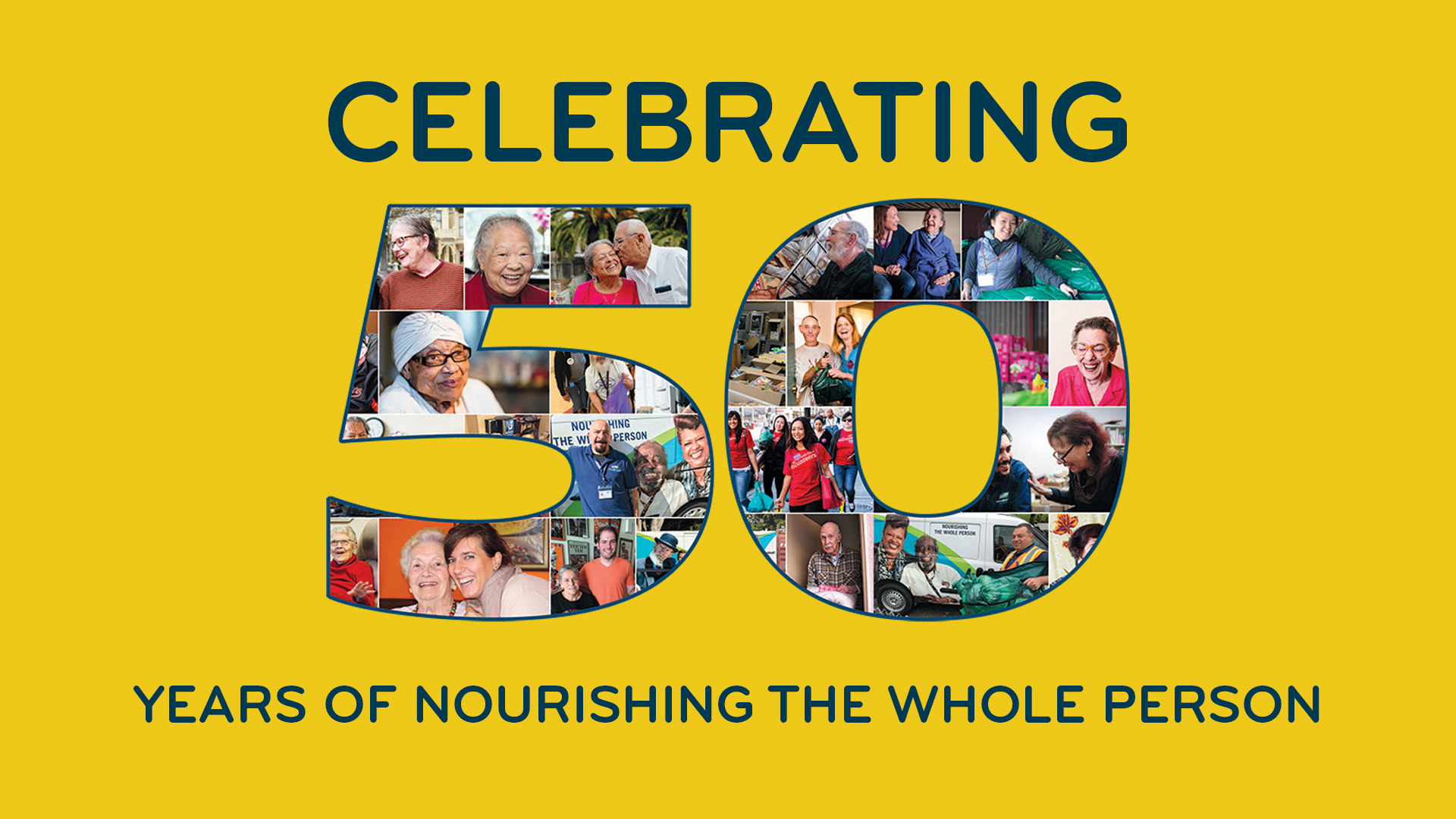 Full steam ahead Between 1980 – 1995. In 1980, full-time social workers and nutritionists were hired to better help seniors who were feeling isolated and to connect those individuals to professional services that helped them live independently. In 1995, we needed a bigger space to prepare meals, having operated out of other facilities and even churches, so with the help of key citizens, funders, and city officials, we opened the industrial kitchen at 1375 Fairfax in Bayview. By 1995, we were delivering meals to over 2,000 clients per day throughout SF.

In 2000, we became certified by Meals on Wheels Association of America (MOWAA) and remained a local, independent nonprofit organization under their umbrella of partnerships. MOWAA is the oldest and largest national organization that supports more than 5,000 community-based senior nutrition programs across the country. MOWSF is one of the largest of those programs under that umbrella.

In 2011, we served our 1 millionth meal!Our volunteer force grew to over 1,000, working alongside our staff of drivers and professional services personnel.

Fast forward to 2020, this year, we are celebrating 50 Years of service to the San Francisco community changing the lives of older adults and their families, empowering them with the ability to live independently and safely in their homes.  Matter of fact, today, because of the dedication, support, and partnerships of so many entities, we are able to provide 2.2 million meals yearly to more than 4,200 homebound seniors, deliver groceries to nearly 500 older adults and adults with disabilities weekly through HDG, and provide nearly 200,000 meals to adults and families who seek shelter and services through one of the city’s Navigation Centers. Not bad accomplishments from just a few meals to a sophisticated and important city-wide program!

However, the need is growing – over 25% of the population of SF is 60 and older and as the city ages, we need to ensure we can keep up with demand.

And that leads us to where we are today! On November 19, 2020, we held a virtual dedication officially announcing the opening of our new, 36,000 square foot state-of-the-art kitchen and food production facility located within The Sangiacomo Flynn Building, the biggest of its kind in the state and just down the street from our Bayview headquarters. This new kitchen, dedicated as the Andy and Teri Goodman Nourishing Kitchen, is built to last for many decades to come and will allow us to increase our meal production capacity from 8,000 meals a day to up to 30,000 meals a day. This facility will pave the way for Meals on Wheels San Francisco to not only keep up the demand for nutritious varieties of meals to the growing population of older adults in need, but it is also poised to be a food production source for other organizations in need of high-quality food, at economical prices.

We are all very excited about the opportunities for the new kitchen, about our 50 years of operations, and the honor and privilege of serving older San Franciscans in need.