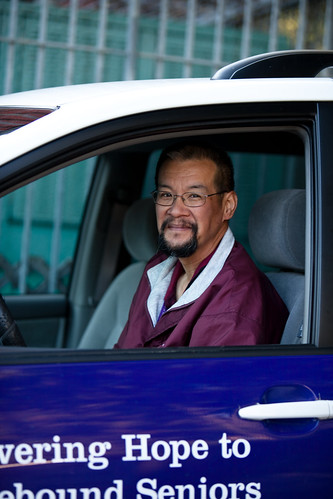 It's the little things. The heart and soul of Meals on Wheels San Francisco (MOWSF) is its people -- the staff and volunteers who help change lives one meal or wellness visit at a time. As our organization enters its 50th year of operations, we bid a fond farewell to a man who has been a part of the foundation of the organization for more than 29 years.

Roland Yee has been delivering meals to homebound seniors in San Francisco since 1986 when he first started as a volunteer on-call driver using his own vehicle and gas. “I didn’t mind using my own car, gas, and insurance,” Roland explains. “We all did this because we knew we were working for a nonprofit.”

A few years later, in 1990, he joined the MOWSF team full time, first taking on delivery of meals to seniors living on houseboats along Fourth Street. He worked a second job at a restaurant while he drove for MOWSF, forgoing full time work with the organization so that his colleague and friend Tony could have the full time job slot and provide financial support her own family.

He’s made many friends along the way, particularly with the seniors he’s seen daily. During the past 29 years on staff, Roland has delivered more than one million meals to program beneficiaries. His routes over the years took him to almost every neighborhood in San Francisco including the Tenderloin and Chinatown, and recently, even to some of SF’s new Navigation Centers helping to feed the homeless as part of a partnership between MOWSF and the City.

Roland, who recently turned 68, delivered more than just meals and food – he made the days brighter for many seniors who had no family to call their own. His attention to the little things that matter that make people feel appreciated and special, is what truly makes his contribution to the organization and the community at large so valuable.

“I went to see the seniors and gave them flowers and candy and talked to them because a lot of them have no family now,” explains Roland who, upon request, was also known to deliver fried chicken to recipients on his route. “They’re just isolating in their apartment and nobody is visiting them. That's very sad especially around the holidays.”

Roland and his wife plan on enjoying their new-found free time together by watching movies, visiting family and friends, and continuing to build a home in the Philippines.

Find out how Meals on Wheels offers more than a meal.

WE DELIVER MORE THAN 2 MILLION MEALS A YEAR

© 2021 Meals on Wheels of San Francisco. All Rights Reserved.